CONCERTS ARE BACK AT SANDSTONE POINT TAVERN AND CLOGGING UP THE ROADS TO BRIBIE. RESIDENTS’ FRUSTRATIONS ARE GETTING GREATER AND GREATER. SO WHAT ELSE IS NEW?

Outdoor concerts at Sandstone Point Tavern now have post-Covid approval to begin again.  Seeing there is no Park-and-Ride available (or any other public transport option), virtually all attendees at these concerts are arriving by car.  And all that traffic is bringing Bribie Island Road to a virtual standstill at concert time.  The road network just cannot cope with that volume of traffic.  Calls for something to be done are growing and growing.  These include calls for taxpayers to fund the twinning of Bribie Island Road (approximate cost of $200m – $300m) and, of course, a new bridge to Bribie (estimated cost of $150m).

The original DA for the Sandstone Point Hotel was for a fairly nominal project that probably could have been supported by the existing infrastructure at that time.  But over the years though a litany of incremental changes made possible by never-ending development applications (all of them legal), the Sandstone Point Hotel has morphed into a development that bears little resemblance to the one proposed in the original development application.  SPH today cannot be supported by existing infrastructure.  Hence the traffic chaos.

Politicians and business leaders today talk about the need for organisations to be “open” and “honest” and “transparent”.  It is interesting to speculate what would have happened back in 2012 if SPH had been “open” and “honest” and “transparent” about its intentions.  Would the project have been approved if the public had been made aware of what SPH would morph into?  The never-ending litany of development applications for further changes continues today.  Who knows what SPH in 2030 will look like?  Who knows what taxpayers will be asked to fund in order for that 2030 vision to be achieved?

One issue that has been quietly changed is the issue of monitoring and control of noise from SPH’s outdoor concerts.  MBRC and the State Government have given approval for the noise guidelines for those concerts to be changed to ones that SPH has drafted.  There was only a vague mention of the possibility of concerts in the original DA.  But now SPH has approval for 11 massive concerts each year and, no doubt, will be asking for more in the future.  With these concerts will come more and more noise issues.

So what do readers think?  Is noise from the SPH site an issue?  Are the current guidelines protecting the public?  Should SPH be required to provide public transport to the site the same way as Suncorp Stadium and The Gabba are required to?  Should taxpayers bear the cost of the ~$300m upgrade to Bribie Island Road to solve the traffic problem caused by SPH concerts?

Message:     My husband and I thought the lifestyle at Banksia Beach suited our retirement perfectly and currently looking to buy a home on Banksia Beach canal, the Main channel, the Promontory or North Point area. This will be our last move so we must get this right. We have noticed Sandstone Point Hotel have a licence to run 12 concerts a year with questionable noise limits, unregulated it seems. Firstly we believe Moreton Council has made an error granting these licenses in what is basically a residential area. They either don’t know how noise impacts residents unable to escape the intrusion or seemingly don’t care. Water is a great conductor of noise and can intensify over distance.  We have had issues before with Govt Depts allowing unacceptable NOISE levels in residential areas. It would appear too late to stop what Council has already granted, which we noticed also impacts traffic flow and congestion to and from the Island. Last thing we want in retirement is fighting Council over quality of life issues. So our question to your group is: do these events impact residents’ quality of life in particular the north point, promontory canal area in regard to NOISE from these events. In other words can these rock concerts be heard in that location? Thankyou

You raise some important questions and issues.  Your letter calls on MBI to make some value judgments which would be inappropriate for a website like MBI.  However MBI has written a number of articles in the past on the general subject of the Sandstone Point Tavern (SPH) and its growth and development.  MBI recommends you look at some of those posts and obtain some background that might answer some of your queries.  Some points raised in previous articles include:

In the State Government elections of March 2012 that brought the Newman Government to power, the long-time ALP Member for Pumicestone, Carryn Sullivan, was defeated by LNP candidate, Lisa France.

In the April 2012 Council elections, incumbent Gary Parsons was re-elected in Division 1.  Cr Parsons had previously run as a candidate for the Liberal Party in the 2001 State elections

During the 2012 Council elections, Division 1 candidate Rick Williams raised concerns about rumours that were circulating about a possible tavern being constructed at Sandstone Point.  Cr Parsons said such a development could not happen and his opponent was just fear mongering.  Cr Parsons comments can be viewed at https://bit.ly/3pSfcPB

In May 2012, (a month after the Council elections) developers lodged an application to construct a tavern complex on that site at Sandstone Point.  An outline of the proposed development can be found at https://bit.ly/3skq8XO

In testimony to the Crime and Conduct Commission some years later, a spokesperson for the Comisky family (the developers of the SPH complex) commented that they had been working on this proposal with MBRC for some years before it was formally submitted.  That testimony to the CCC can be seen at https://bit.ly/3bzyFQ9

Through a long list of amendments to the original Development Application (DA), major expansions and changes have been approved and implemented and further changes are underway.  The complex today bears little resemblance to what was proposed in the 2012.

While all these changes have followed all the due procedures, SPH has never undertaken any “town hall” gatherings to meet with local residents to hear their concerns face-to-face. Neither have any of the State or Council representatives for that area ever held any such a meeting to hear the concerns of residents face-to-face.  All interaction has been in writing (such as submissions to DA applications), or in one-on-one meetings, or through legal or other official channels.

One of the approved changes to the original proposal was the approval of the use of the SPH site for nine major outdoor concerts.  There is a vague reference of the possibility of concerts in the 2012 application in Section 1.1(iii).  In an application to MBRC in 2018, SPH sought approval for a proposal that could have resulted in as many as +30 concerts per year.  This was rejected by MBRC and approval for an increase to 11 concerts was approved.  In response to objections raised by affected local residents, SPH agreed not to apply for further concerts for some years.  It is to be assumed that at the end of this period, an application for further concerts will be made.

Noise issues on properties serving alcohol in Queensland are monitored and policed by the Office of Liquor and Gaming Regulation (OLGR).  Some time ago, SPH operators argued that the OLGR noise regulations were intended for indoor activities and were inappropriate for outdoor activities.  SPH submitted that if, during concerts, the stage area was excised from the area licensed for alcohol consumption and alcohol consumption was banned from the stage area, then that stage area would be out of the jurisdiction of the OLGR and would come under the jurisdiction of MBRC.  The OLGR accepted that proposal and has walked away from any responsibility for noise control for those concerts and has turned it over to MBRC

Seeing MBRC had no regulations in place for monitoring or policing of noise from outdoor concerts, it called on the Tavern operators to submit an application to cover this situation.  A copy of the DA to cover additional outdoor concerts and noise from those concerts can be found at https://bit.ly/3qNfEA1

A key clause in this DA is Clause 8(a) which sets the maximum noise level at 70dB(A) when averaged over any time period up to a maximum of five minutes.  Council has interpreted this to mean that noise is to be averaged over five minutes to determine if it is within approved limits.

Noise issues have been a major concern for residents of the area and many complaints have been lodged with Council over the issue.  Because they have not been satisfied with the response by MBRC to concerns raised, many of these complainants have formed a community group – The Pumicestone Area Noise Abatement Group (PANAG).  PANAG has met with Council and with SPH to voice their concerns.  This has resulted in some concessions (such as the agreement by SPH to call a halt to requests for more concerts for the moment).

One of the noises causing the most complaints is the intense but brief noise of base guitars.  PANAG has argued that if the noise were averaged over a shorter time period of say 0.1 seconds (as is allowed under Section 8(a)), then that bass guitar noise would exceed 70dB(A) and would be illegal.  Council does not accept that argument.  It continues to argue that noise is to be averaged over 5-minute intervals.

MBI trusts this information is valuable.  It may not answer the questions you raise, but it gives some background that you can pursue further if you wish 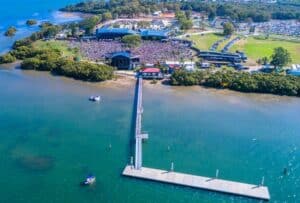 YET ANOTHER APPLICATION HAS BEEN LODGED WITH MBRC FOR A MATERIAL CHANGE OF USE OF THE SANDSTONE POINT HOTEL SITE. HOW MANY MORE ARE GOING TO COME? WILL THEY EVER STOP? WILL COUNCIL CONTINUE TO APPROVE THEM REGARDLESS?